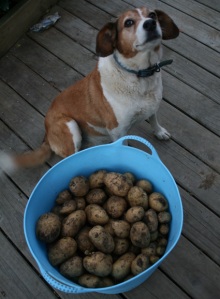 Every year I put in a main crop of ‘Agria’ spuds – they’re by far the best for winter roasts and hot chips – as well as an early crop of ‘Jersey Benne’ or ‘Cliff’s Kidney’ for Christmas Day, but this year my vege patch planning was thrown out of kilter by morning sickness. I put in a bag of ‘Agria’ seed spuds the week I found out I was pregnant in September, but I never quite got around to getting any ‘Cliff’s Kidneys’ in the ground. Not to worry, on Christmas Day we dug up half the ‘Agrias’ and ate them instead.

We dug the rest of my spuds early this week, as I need more space at the end of the asparagus bed to plant lettuces (we’re serving gourmet hamburgers at our wedding). We filled a 40-litre plastic trug with mighty fine tubers, which weighed in at 17.4kg. I’m proud as punch. That means my total yield was probably in the vicinity of 30kg. What a difference decent soil (and three bags of sheep pellets and two bags of blood and bone) makes.

The dog posing with the spuds is our Beagle/Jack Russell cross, Gypsy. (I kid you not: that’s what she was advertised as when the Hunk rescued her from a backyard in one of the meaner streets of South Auckland a few years back. I suspect her previous owners may have been stretching the truth somewhat…)

Gypsy is my favourite dog today, while Mr Puppy Doo-Hawg (our 11 month old border collie) is in my bad books. He digs holes when he’s bored, and he must have been very bored yesterday because the little sod uprooted half the white garden underneath our lounge window. Just when the impatiens had finally linked limbs and were looking lovely (especially in the moonlight), he destroyed about a dozen of them. And he also dug up (and appears to have actually eaten) one of my ‘Bridal Bouquet’ hydrangeas. We’d just mulched the bed with fresh compost so his blackened dirty paws were a dead giveaway.