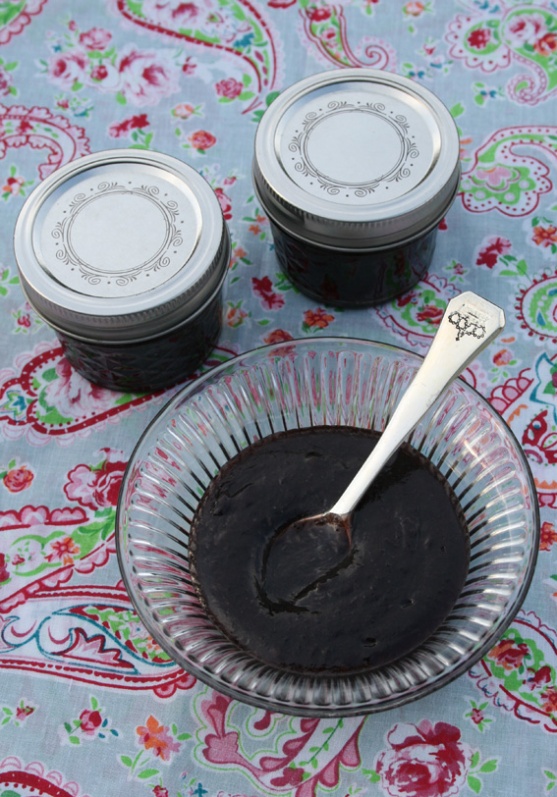 I’ve invented a new game called ‘Guess The Jam’. I suspect it won’t catch on like Monopoly or Scrabble, but it basically involves me waving small pots of mystery preserves and conserves at Mum, Dad, my husband, my workmates… and anyone else  game enough to put their tastebuds to the test. There are no prizes for guessing correctly – except, perhaps, a second spoonful – which is just as well because this week’s concoction had everyone stumped.

This is my first attempt at Blueberry & Bay Leaf Curd. I saw the recipe in Country Living magazine, and in their photo it was a beautiful, bright purple, clear (almost jelly-like) jam oozing over warm scones, whereas mine turned out more like Nutella. It’s velvety smooth, thick and chocolate-coloured with an intriguing (and utterly delicious) flavour. Because it looks like chocolate, it actually tastes like chocolate. (Not one of my blind tasters could pinpoint any of the ingredients, but all assumed it had chocolate in it.) I have no idea where I went wrong, but it could have been any one of these things I suppose: (a) I used frozen blueberries, rather than fresh; (b) I used fresh bay leaves, rather than dried; (c) I didn’t have any vanilla extract so I used vanilla paste; and (d) who keeps unsalted butter in their fridge? I used plain salted butter. I also used my own free-range eggs, still warm from the hen house, and they have lovely orange yolks so perhaps that had an effect on the colour as well. I’ll try again and see what happens.

1. Put the blueberries into a pan with a splash of water and the bay leaves. Bring to the boil and then simmer for 5-10 minutes until soft. Tip into a sieve set over a bowl and push with the back of a spoon to extract as much juice as possible.

2. Melt the butter and sugar with the juice and vanilla in a bowl set over a pan of simmering water. Strain the eggs to remove any threads. Keep stirring for 20-25 minutes until thickened, taking care not to overheat.

3. Pour into sterilised jars, seal and label when cold. Eat within one week.